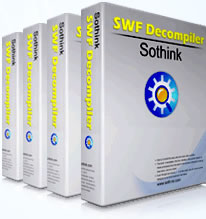 Do you often find some cool Flash effects on the web but have no idea how to save it? And when you need to create those Flash effects, do you end up spending a lot of time figuring out how to make it by Adobe Flash? We all do. SWF Decompiler offers a solution to save animated Flash movies (SWF files) on the web to your local computer, and extract those cool animated Flash effects from Flash movies and export them into FLA files (*.fla is the authoring file of Adobe Flash) instantly and painlessly by only a few clicks. Finally, you can open the exported Flash effect (FLA file) in Adobe Flash so as to learn how the effect is made or even reuse it in your own Flash animation movie.

(Tip: an animated Flash effect is generally stored in the Sprite folder.) 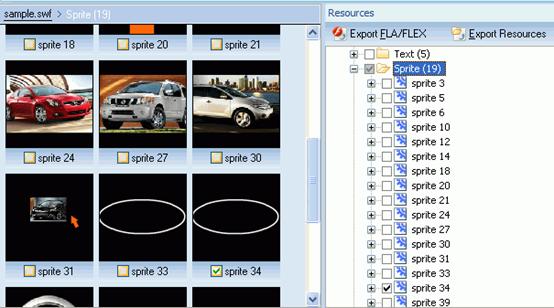 Click the Sprite folder on the right to browse all sprites of a Flash movie; double click thumbnails in the preview window on the left to preview them one by one.

The following is the Flash effect I want to get： 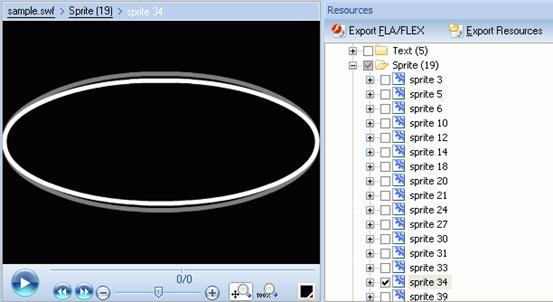 Check the sprite I found, and click “Export Resources” to open the configure dialog. 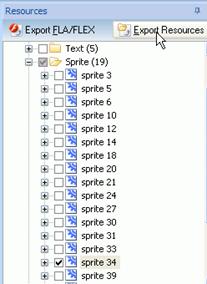 Choose a path for saving the exported FLA file, and click “OK” to finish extracting and exporting.

As shown as above in Adobe Flash, you could easily learn how the Flash effect is made from those motion tweens in timeline, and even you could make a little changes and reuse it in your own Flash movie authoring.

SWF
"The file format[1] SWF, has variably stood for "Small Web Format" or "Shockwave Flash". It is a partially open repository for multimedia and vector graphics, originating with FutureWave Software and then coming under the control of Adobe. Intended to be small enough for publication on the web, SWF files can contain animations or applets of varying degrees of interactivity and function.
SWF currently functions as the dominant format for displaying "animated" vector graphics on the Web. It may also be used for programs, commonly games, using Actionscript.
SWF files can be generated from within several Adobe products: Flash, Flex Builder (an IDE), as well as through MXMLC, a command line application compiler which is part of the freely available Flex SDK…" --Wikipedia